“RELIABILITY THROUGH OUR EXPERIENCE” 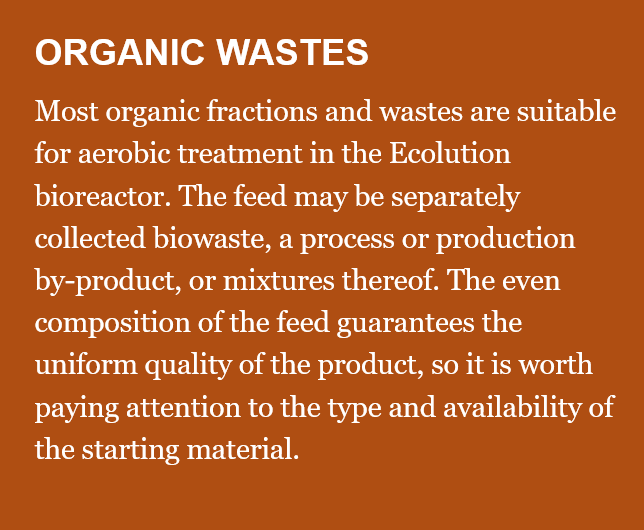 The Ecolution bioreactor is an alternative to traditional methods of treating organic waste. The method is based on the activity of aerobic microbes, as a result of which the mass to be treated is converted into a nutrient-rich material produced by the microbes. The produced microbial biomass is suitable as such or in the form of granular fertilizer for agricultural use. The method is not only cost-efficient, but also a quick way to treat organic waste fractions, reduce the amount of material and dry it. Bioreactor processing can thus combine waste treatment and fertilizer production.

Decomposition is a challenge for biomass processing. Uncontrolled anaerobic degradation causes a wide range of harm to the environment. Proper recycling and treatment of waste fractions are prerequisites for achieving sustainable development, therefore it is worth investing in the treatment of organic waste.

The method is based on uniform aeration

The success of the aerobic process requires a uniform distribution of air to prevent anaerobic pockets. The Ecolution bioreactor’s patented aeration technology, combined with a unique mixing method, allows for even air distribution during the process, allowing the process to progress toward the desired end product quality.

A fresh organic fraction is fed to the reactor, after which it is stirred and aerated at levels. The process can be controlled by changing the amount of air and the speed of mixing. The agitator blades push the material forward to the next levels. The product is collected at the bottom of the reactor.

Microbes convert biomass to microbial mass. A prerequisite is that the biomass contains a sufficient number of molecules required for microbial function, such as protein, lipids, and carbohydrates. No specific microbial strain is fed into the process, but the wild microbial strain formed during the process creates the best conditions for processing the respective feed. 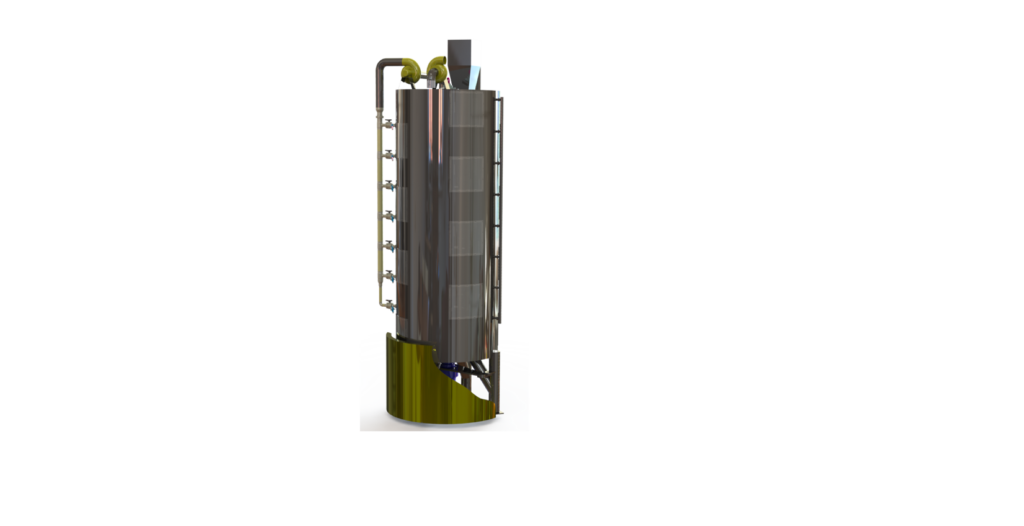 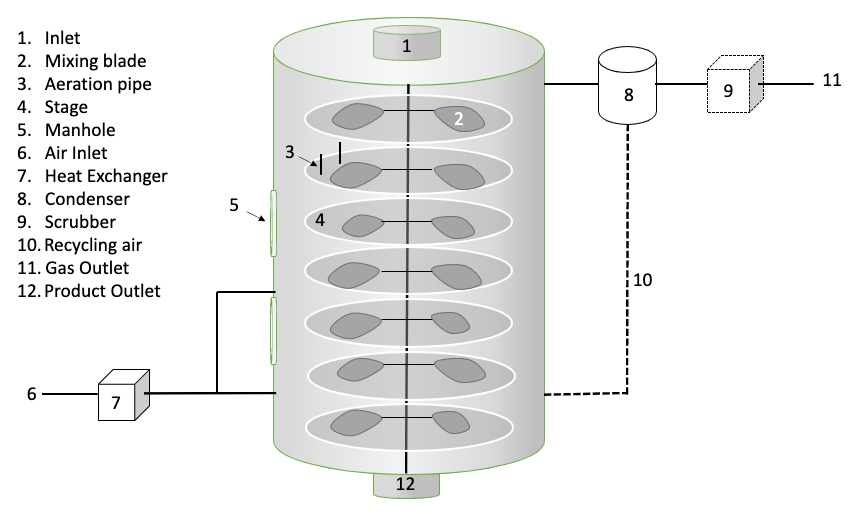 Air can be fed to the process at different temperatures and with different oxygen concentrations, which makes it possible to create optimal conditions for different process steps. In the final stage, when the microbes have utilized the available nutrients and produced new microbial mass, a decrease in temperature is observed. In this case, recirculated air with a lower oxygen content than fresh air can be fed to the lowest levels to end the process. As the oxygen content of the air decreases and the temperature decreases, the microbes lose their activity and the process ends.

In the co-operation projects of Ecolution Oy and Chemitec Consulting Oy, the method has been developed over the years, and experiments have been successfully carried out on several different types of fraction, such as restaurant biowaste and okara, which is a by-product of tofu and soymilk production.

The bioreactor treatment not only allows the generation of new biomass, but also releases the intracellular water, whereby the mass dries, but the nutrient content of the biomass is maintained. Okara is an example of a material with a remarkably high moisture content. By drying okara in any dryer, the weight of the mass is reduced by up to 90 %, but at the same time

valuable volatile nutrients such as nitrogen are lost. In the Ecolution bioreactor, nutrients are made to remain in the biomass, even if the material dries during the process. This is a significant advantage for the treatment of biomass, and the product results is a nutrient-rich material with a fertilizer potential comparable to that of mineral fertilizers.

FERTILIZING EFFECT OF THE PRODUCT

The equipment and processing method of the Ecolution bioreactor have been developed over the years. One milestone in technological development was reached when the growing trial race found that processed okara fertilizer had the desired effects and competed with industrial mineral fertilizers. In particular, high concentrations of phosphorus, potassium and nitrogen, together with beneficial magnesium, manganese and calcium, give admirable growth results.

According to the test results, the nitrogen content of the fertilizer made of okara is relatively high. Typically, nitrogen is present in fertilizers as soluble nitrogen, making it immediately available to plants. The problem is the leaching of soluble nitrogen with watering and rainwater into the waterways, which prevents the plants from making the best possible use of conventional fertilizers. Therefore, the fertilizer has to be added during each growing season. 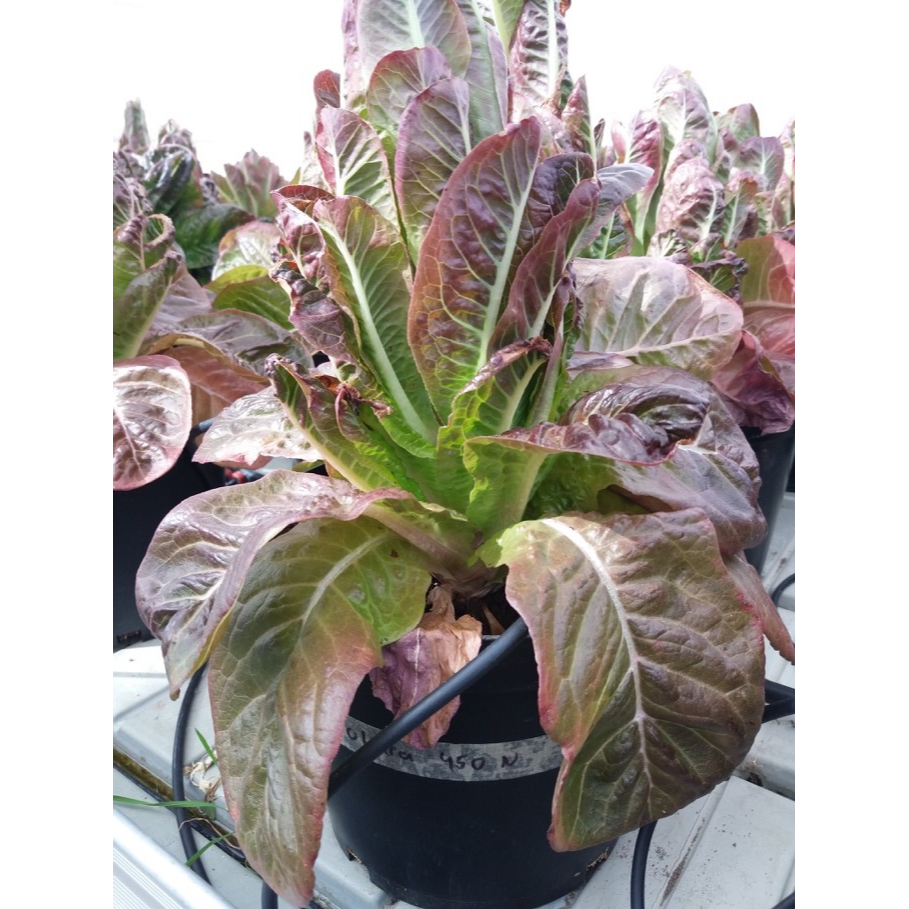 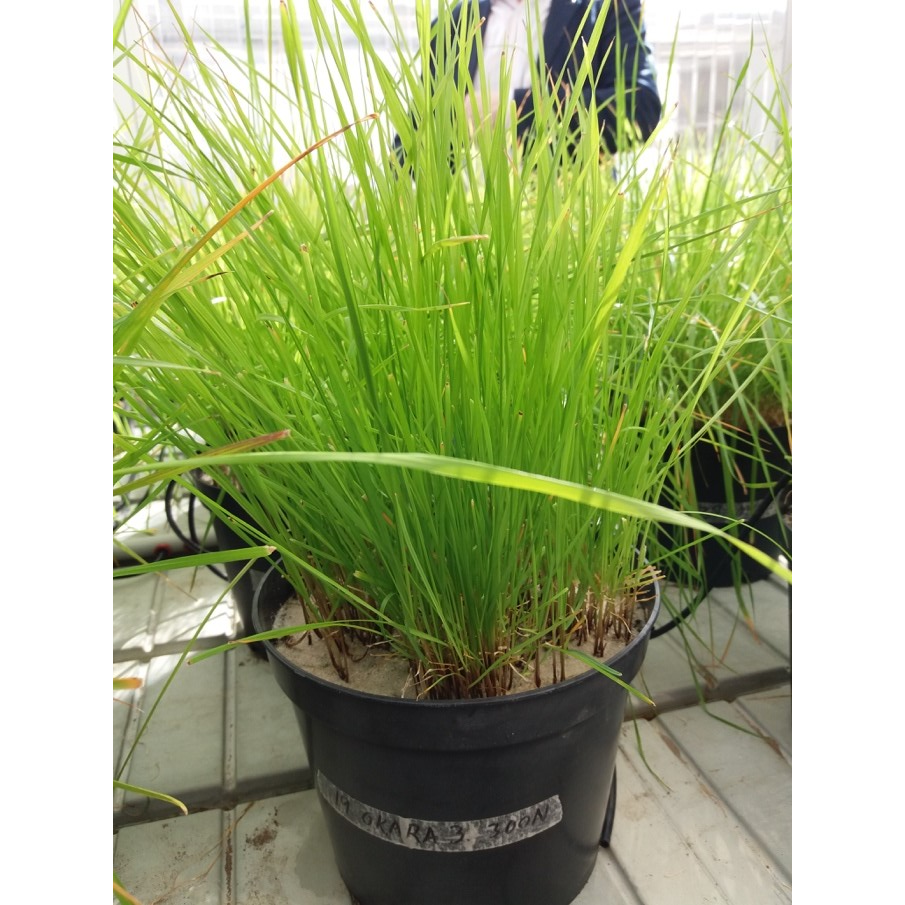 Picture 2: Lettuce and ryegrass growth on the Viikki campus of the University of Helsinki in summer 2019 (photos, Tiina Piira)

In the fertilizer produced in the bioreactor, a significant portion of the nitrogen is in an insoluble form, allowing it to be released by soil microbes for utilization by plants, and leaching is not a problem. As a result, nitrogen intake is evenly distributed over the growing season and is sufficient for several years. In the growing experiments, it was found that the fertilizer produced by the bioreactor outperformed the mineral fertilizer in the third growing season. Although in the first two seasons the mineral fertilizer outperformed the okara fertilizer, the soil fertility was better in the long run when the organic bioreactor fertilizer was used.